Deer are among the very first animals to have been represented in early human art. They can be found in the earliest cave paintings and carvings ever discovered. Our relationship with deer is that of hunter and hunted, but it’s also more complex than that. Deer can also represent the soul, a spirit of mystery, and are often symbolic of shape-shifting deities. They play a sacred role in Indian, Egyptian, Greek, Huichol (Mexican), Hindu, Celtic, Buddhist, and Islamic cultures. In Japanese Shinto tradition, deer are kept at shrines as sacred messengers to the gods. 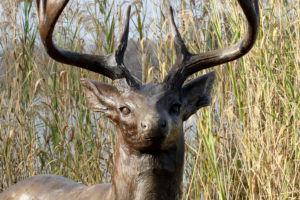 While Bob Guelich was once solely a painter, he learned that he loved sculpture because he preferred working three-dimensionally and felt that it better expressed his creativity and love for animals. Guelich has created artworks for zoos, sculpture parks, and universities all across the United States. He has also won several national awards including the National Sculpture Society Gold Award for his artwork. 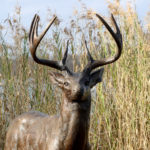