Box Turtle II was cast in silicon bronze in the artist’s personal foundry, which he has operated with his father since 1983. Turtles are another animal that features widely in traditional art and mythology. In India, and among east coast Native American tribes, such as the Iroquois and Lenape, a giant turtle or tortoise is part of their creation story, carrying the Earth on its back. In cultures where turtles are traditionally eaten, their shells are often used as bowls and are decorated or carved. Notice the detail on this turtle’s shell and the expression on its face. What do you think the artist is expressing about this ancient creature? 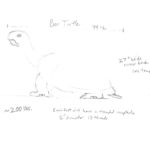 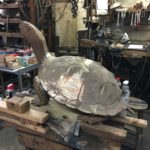 The artist, David Turner, has been a professional sculptor for 35 years, during which he has made over 60 large public commission sculptures at zoos, museums, aquariums, universities, and municipalities throughout the United States. David works from his own foundry with his father, Bill Turner, on the Eastern Shore of Virginia. They are inspired by the wildlife of the Chesapeake Bay. They have over 100 public sculptures in many famous places and one of their sculptures was owned by former President George H.W. Bush. 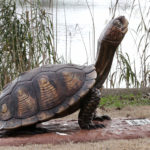