Taking Flight is comprised of stylized birds taking off together. They were cast in an aluminum/magnesium alloy known as “Almag 535.” This material is strong, light, and corrosion resistant. Each bird weighs approximately 50 pounds.

Blumberg wanted to create a Waco-specific sculpture of birds taking off that would complement the character of the location. He wanted to interact with the themes of hope and optimism captured in the mural of the origami cranes taking flight (on Jackson & University Parks in Downtown Waco). “Taking Flight” also references other recent works by the artist, including a memorial monument he recently completed for Aurora, Colorado.

The bird shape he has designed around is styled on geese, which are also evocative symbols of spirituality and hope in Native American and Celtic cultures. The artist has created a dramatic upward sweep, capturing the idea of a flock (or community) taking off together. Geese are purposeful in their flight shape and cover thousands of miles as a flock, taking it in turns to lead the group forward. This is a great metaphor for the changing leadership roles in our own community. 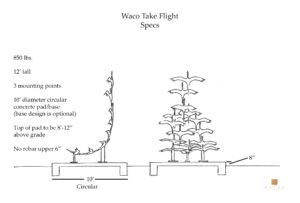 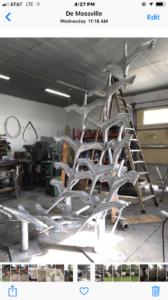 As the child of two artists, the artistic talent of Douwe Blumberg was discovered very early on. He was born in Los Angeles, then spent a lot of time as a child in Europe where he was exposed to western artistic traditions. He attended the prestigious Idyllwild School of Arts and Music and then the University of Southern California which he followed up with 4 years of sculpture and metal working.

However, before becoming an artist, he became a professional horse trainer for 18 years. Eventually he started sculpting again. Demand for his work grew, and he chose to close his barn in 2000 to sculpt full time. Since then, he has created over 200 private and public commissions. Some of Blumberg’s most famous works are the memorials at ground zero in New York City and to commemorate the theatre shooting in Aurora, Colorado.

Blumberg is recipient of several national awards, including the 2002 Leonard J. Meiselman award in Sculpture from the American Academy of Equine Artists, the 2003 Loveland sculpture invitational, and the 2003 ADEX design award. 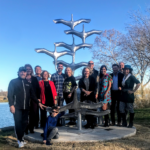 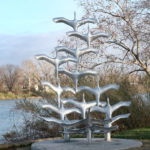