Ely Playing with a Stick

Ely Playing with a Stick is a bronze replica of an original work in limestone depicting a disabled baby elephant. White was inspired after reading the book Echo of the Elephants, by Cynthia Moss.

Ely was an unusually large calf, and his front legs had been so restricted in the womb that he couldn’t straighten them, so he was born unable to walk and had to shuffle along on his knees. It was feared he would die, as he had trouble nursing, but thanks to the care of his mother, and his determined attempts to straighten his legs, he gained strength, eventually overcoming his disability, and is today a fully-grown bull elephant in Kenya’s Amboseli National Park.

In this piece Ely has his legs fully stretched out in play. The original artwork was carved in limestone using various power tools–large and small angle grinders,
a hammer drill and various burrs with a die grinder gave the final texture of the many wrinkles of an elephant’s skin. 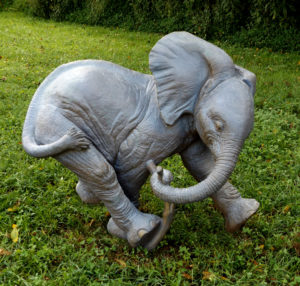 Meg White hails from New Albany, Indiana and is a completely self taught sculptor who discovered the process through paper sculpture.

White is principally a stone carver who creates large to monumental works in Indiana Limestone. Her work is inspired by the written word whether work she feels compelled to create or work that is commissioned. 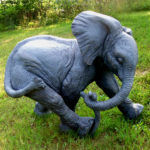 Ely Playing with a Stick