Tyson is comprised of steel and sculpted, pigmented concrete. It is a much larger than life piece that weighs in at 1163 pounds! The artwork is named for Paul Leighton Tyson (1886-1950) who was Waco High School’s championship-winning football coach from 1913-1942, and is revered as one of the most successful high school football coaches of all time. Under Tyson’s leadership, Waco High played six consecutive national championship games between 1922 and 1927, losing only two. The sculpture evokes the original Waco High School tiger mascot. If you know someone who was a Waco High student in those glory years, ask what the tiger mascot means to them. Notice that the artist has captured the characteristics of a real tiger as well as the characteristics of a mascot tiger. What do you think makes us choose an animal like a tiger to represent a sports team?

Artists Solomon Bassoff and Domenica Mottarella work together in sculpted, pigmented concrete which they sculpt by hand like clay. They then add steel, tile mosaic, glass and other materials to create unique and whimsical animal characters that are designed to invite exploration and curiosity. They like to convey animals’ emotional characteristics to create a connection between the human and animal world with their unique blend of naturalism and realism.

Together, Bassoff and Mottarella run Faducci Studio, located in the foothills of the California Sierra Nevada. They have created much-loved public artworks In California, Washington, Oklahoma, and Texas. Keep a look out for them, as they are very recognizable. These artworks always look like they are about to tell you a story. 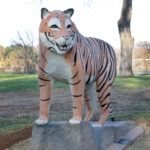