These mother and baby elephant sculptures are made with an open wire frame construction. The sculptures are composed of 3/8” steel rods with a 6-layer powder coated surface. The six layers include: a base coat of primer, four applications of paint, and a semi-gloss clear coat. Scott estimates that between the two pieces, he executed over 10,000 welds! The baby elephant weighs approximately 500 pounds while the mother elephant weighs over 1000!

Human interaction with elephants has been part of their story – and ours – for thousands of years. Despite their strength, elephants submit themselves to human training and are major economic assets in many places, performing work that would take the strength of dozens of humans. They perform circus tricks for us, we hunt them as trophies or for their ivory, and we build on places where they once roamed wild. Yet humans also protect and care for them.

Notice how although these sculptures represent solid and bulky animals that we characterize as strong and resilient, these linear abstractions are really subtle. They look fragile, almost look like ghosts of elephants walking across the park. Why do you think the artist has depicted a mother and baby elephant like this? What does it make you think about these animals? What does it make you think about their relationship with humans? 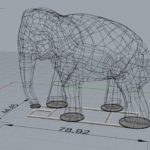 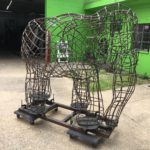 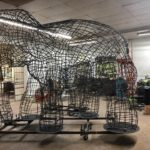 Andrew F. Scott is Associate Professor of Art and Technology at the University of Texas at Dallas where he currently resides. Throughout his career he has been a pioneer of traditional studio art practice intersecting with digital and technological design techniques. Scott utilizes laser cutters, CNC mills, 3D printers, and scanning technologies and has consulted on design for transportation and engineering projects as well as arts commissions.

As the coordinator for Sculpture for the Savannah College of Art and Design (SCAD), he taught courses for the School of Foundations, School of Design, and The School of Building Arts. While at SCAD he also managed the celebrated Sand Arts Festival at the Tybee Island beach, attracting more than 500 student sculpting teams and 10,000 visitors.
At the University of Texas in Dallas, he designed and developed a laboratory focusing on the nexus of digital fabrication and traditional studio practice.

In 2014 he completed a memorial to fallen police officers for the city of Gainesville, Florida. His first projection mapped sculpture Reliquary was presented in the 2015 PULSE Art and Technology festival at the Jepson Museum in Savannah Georgia. In 2012 he was invited as the featured artist for the Cartasia Sculpture Biennial in Lucca, Italy. His work Black Man Grove Resilience graced the historic Piazza San Michele. During the same year his sculpture Follow the Drinking Gourd was presented in PULSE festival and remained suspended in the Atrium of the Jepson Museum throughout the year. In 2014 he participated in the Signs of Life exhibition at Rush Arts Corridor Gallery in Brooklyn, New York. In 2011 he presented Digital Sculpture Explorations at the Jepson Museum. In 2008 he installed the world’s largest gavel in the south reflecting pool of the Ohio Supreme Court. 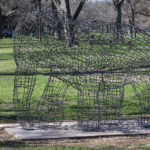 Next Sculpture →
Razak and Auntie